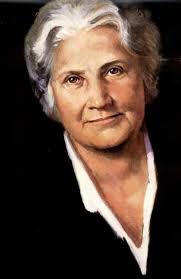 Dr.Maria Montessori was born in Chiaravalle, Italy in 1870 – the year in which Italy first became a united nation. Maria Montessori was truly a remarkable woman who was ahead of her time. She became well known for her advocacy of social reform through the education of children. She became the first female doctor in Italy when she graduated from medical school in 1896. Her clinical observations in her medical practice led her to analyse how children learn, how they construct themselves from what is in their environment.

She realized that children construct their own personalities as they interact with their environment. She also observed the manner in which they learned as they spontaneously chose and worked with the auto didactic materials she provided. Dr. Maria Montessori founded the first Casa dei Bambini or Children’s House at San Lorenzo district of Rome in 1906. The Montessori method of education developed there and is based upon Dr.Montessori’s scientific observations of the children’s effortless ability to absorb knowledge from their environment, as well as their sustained interest in manipulating developmental materials.

She studied children of all races and cultures in many countries around the world, soon seeing the universality of the laws of human development. She also observed the manner in which they learned as they spontaneously chose and worked with the auto didactic materials she provided.

Her method was developed based upon what she observed children did, naturally, themselves, unassisted by adults. Children taught themselves. This simple but profound truth formed the cornerstone of Montessori’s life-long pursuit of educational reform, a reform that was built upon the child’s self-creating process. She realised that children have a natural love of learning and that education is an ‘aid to life’ and must be provided in a secure and harmonious environment.

Today there are Montessori schools all around the world both in the private and pubic sectors and Maria Montessori’s work continues to grow, serving the needs of children in many countries.

Unlike other educational philosophers, Dr. Maria Montessori developed an educational method to implement her philosophy. Her genius in scientific observation of children is an important reason for the enduring and widespread impact of her work. The two key components of the Montessori method are the prepared environment and the trained educator who prepares the environment as a nurturing place for the child, designed to meet the needs of self-construction. Montessori education is unique in that it is child-oriented, teacher-facilitated and allows the educator to treat each child as an individual.

Dr.Maria Montessori was also a devoted humanitarian; she was  nominated three-times for the Nobel Peace Prize for her advocacy efforts toward a more peaceful humanity. She continued her observations throughout her life, widening and deepening her understanding until her death in 1952.

Children are human beings to whom respect is due, superior to us by reason of their innocence of the greater possibilities of their future.